(PLEASE NOTE: you may be seeing this twice as I cross-posted to my Homeschool / Mommy blog. My apologies but I felt it was relevant to both blogs)

So, again, this is something I first saw on Pinterest. Here is the blog link.

Yogurt is big in our house. I eat it for breakfast a lot and both kids like it. So, when I saw this, I thought “I gotta try that”.

We always have extra milk and this seems to me to be a great way to use up milk before it goes bad. We do freeze gallons all the time as well, but still… I only have so much room in my freezer

So, here’s how it goes. You will need (this recipe can be doubled, halved, etc. as needed / wanted):

8 cups milk (about half a gallon)

1/2 cup plain yogurt from the store (one of those single serving sizes of plain yogurt is perfect, after your first batch, just save some for this)

And here’s how it’s done.

This is a process that’s a minimum of 13 hours start to finish. 5 hours cooking & cooling, another 8 hours ‘growing’. I start it at about 5:00pm or later the night before and have yogurt in the morning. Just figure when you want it to be ready (unstrained) and subtract 13 hours, lol. I use 1 cup unstrained in a smoothie in the morning and then strain the rest (more on that below).

Pour the 8 cups of milk into your slow cooker. I have one that is the perfect size to just fit it all. 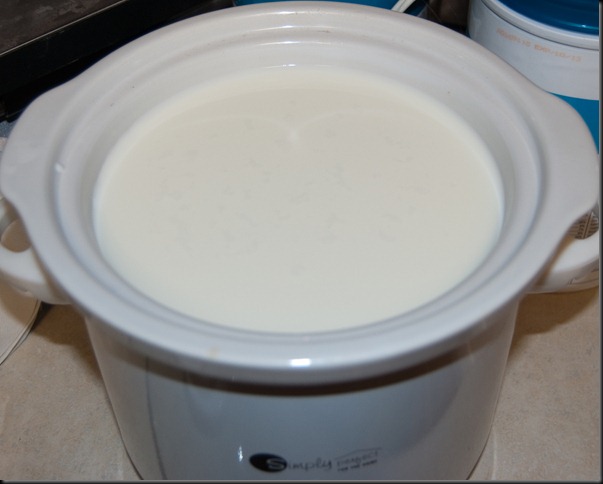 Take out 1 – 2 cups of the heated and cooled milk and put in a bowl. To that, add the 1/2 cup of pre-made yogurt, any sweetener and any flavouring (only use FLAVOURINGS in this step like extracts, not jam, preserves, fruit, etc. If you want those add them later. You can also, of course, skip it at this point and mix extracts in later, but they may incorporate more evenly while it’s still liquid and hasn’t started to thicken). Whisk well. Then pour mixture back into the rest of the milk in the cooker and whisk. (it’s all bubbly from the whisking)

Now comes the growing part. You want to keep it as close to 110-115 degrees as possible for 8+ hours. I wrapped mine in a towel and put it in the oven WITH THE OVEN OFF. This just kept it out of the way, out of drafts and in an insulated space.

10 hours later, it looked like this: (yes, longer than 8 hours is fine, it just may be more sour)

At this point, it’s 100% ready to eat. However, it is thinish. If you want a thicker yogurt, strain it. 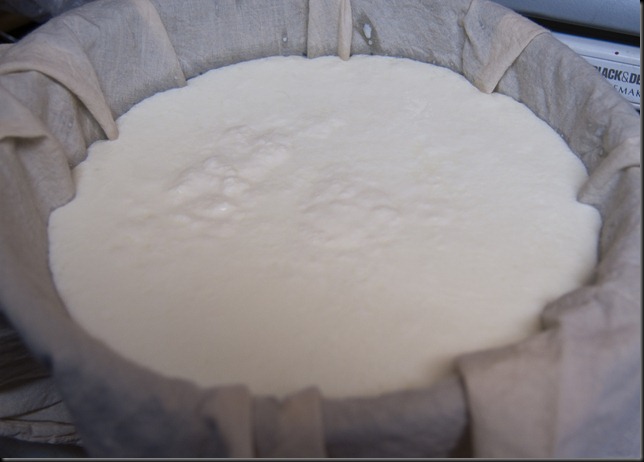 Put it in the fridge to strain for a few hours, checking it until it’s the consistency you want. This was mine after about 3 hours. Just happened to be the time we were gone this morning

This is how much strained yogurt I wound up with, this is a 3 1/8 cup container. There was about a cup more that didn’t fit.

The whey that is strained out at the bottom is USEFUL, don’t just throw it away. Put it in a jar or container and keep it.

This is a quart size Mason jar, so you get about half yogurt and half whey if you strain it as much as I do.

Whey is nutritious, full of protein (Know those protein powders? Most are whey based). Add it to smoothies, I’ve read it can be used in bread to replace milk / water, in pancakes in place of buttermilk, etc. I used some from the last batch in place of the water in my pancake mix for the kids and it worked GREAT. Freeze it and use it in place of ice cubes in blended smoothies (I haven’t tried that yet but will soon), Google more uses

If it’s still not sweet enough when it’s all done, feel free to add more. You can also add jam, pureed fruit, cut up fruit, whatever. My 2 year old daughter loved it just like this. A little imitation honey (because I can’t handle full sugar) and vanilla and she was a happy camper.